Anticommons, the Coase Theorem and the problem of bundling inefficiency 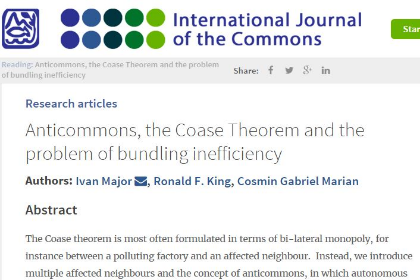 The Coase theorem is most often formulated in terms of bi-lateral monopoly, for instance between a polluting factory and an affected neighbour. Instead, we introduce multiple affected neighbours and the concept of anticommons, in which autonomous actors with separate yet necessarily complementary inputs each has the right to deny but not to permit use. Once we posit multiple owners possessing complementary rights, strategically maximizing against each other as well as against the actor who wishes to purchase a portion of that right, the outcome is neither efficient nor invariant. Our finding, based on non-cooperative game theory, is sustained even under the restrictive Coase assumptions regarding complete information, perfect rationality, and zero transaction costs. The implication is that suboptimal bundling agreements in cases of multiple stakeholders is not the mere product of market imperfection, but instead is a systematic result.