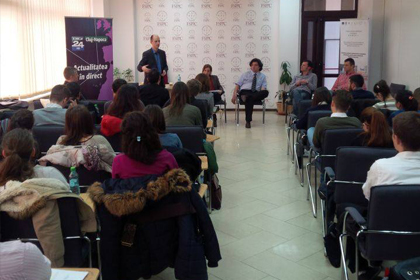 The Center for the Study of Democracy, in partnership with the „Politics without barriers” coalition, organized on Friday, April 3rd, 2015, at the Faculty of Political Science from Cluj, a debate regarding proposals for the reform of the legislation on political parties and national and local elections. Gabriel Bădescu, George Jiglău, and Daniela Angi spoke on behalf of CSD. Andrei Tiut (Civitas ’99) and Codru Vrabie (Funky Citizens) held presentations on behalf of “Politics without barriers”. Journalist Marius Bența (Digi 24) moderated the debate. Over 30 NGO members, students and journalists took part in the debate.